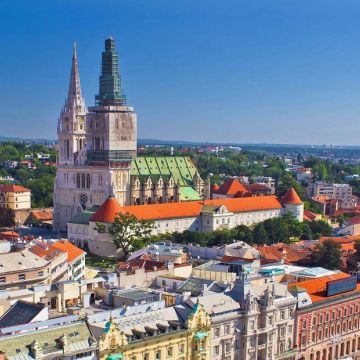 Arrive at Zagreb airport and transfer to the hotel. Overnight stay at Zagreb area.

After breakfast at the hotel enjoy the city tour of Zagreb. Zagreb grew up on two neighboring hills: Kaptol - the centre of spiritual and religious life of north-western Croatia and Gradec - the commercial centre of skilful tradesmen and craftsmen. Take an easy walk with your guide, visiting the Upper Town with its Gothic Cathedral, the beautiful and ornate St. Catherine’s church or the massive St. Mark’s church with its famous color-tiled roof. Continue to the medieval Stone Gate and “Dolac”, the open-air market which are a must for all visitors. Overnight stay at  Zagreb area.

Breakfast at the hotel. Transfer from Zagreb to Split, en route visiting Plitvice National Park.  Plitvice National Park is one of the most beautiful and best preserved national parks in the country. This is why the entire lakes and surrounding area were declared a national park in 1949 and are listed on the UNESCO`s list of World Heritage Sites because of its exceptional beauty. It is a valley situated between high forested mountains in which lie, one below another, a string of sixteen beautiful lakes of crystal blue and green waters. Fed by small streams and brooks, they spill into each other in 92 foaming cascades and thundering waterfalls. The lakes themselves cover about 2 square kilometers and the entire national park covers 200 square kilometers. The Plitvice lakes` scenery will simply delight you regardless whether you are walking the paths and wooden bridges, taking a boat ride or just taking photographs. Transfer continues to Split (Duration approx. 2,5 hrs). Overnight stay at Split area.

After breakfast at the hotel enjoy the city tour of Split. The Split tour will take you along the Old City to visit main sights: the old town of Split is built on and around the spectacular Roman Palace erected by the Roman Emperor Diocletian in the 4th century. The walking tour starts with a visit to the cellars of the Palace that are still very well preserved. The cellars offer a good view at how the life in the Palace was organized. The Cathedral St. Duje is a complex of a church, formed from an Imperial Roman mausoleum, with a bell tower; strictly the church is dedicated to the Virgin Mary, and the bell tower to Saint Duje. Together they form the Cathedral of St. Duje. Overnight stay at Split area.

Breakfast at the hotel.  Transfer from Split to Dubrovnik,  en route visiting Ston with oysters/mussels degustation. Ston is a small town on a narrow isthmus connecting the peninsula of Peljesac with the mainland, known for their traditional salt production, construction of a huge, fortified complex encompassing the settlements of Mali and Veliki Ston and high quality oysters/mussels. The best oysters in Croatia and the world come from Mali Ston bay, which has been famous for seashell cultivation since the Roman Empire days. Transfer continues to Dubrovnik. Overnight stay at Dubrovnik area.

Breakfast at the hotel. «.... Those who seek paradise on Earth should come to Dubrovnik» (George Bernard Shaw). This walking tour will open the doors to you to one of the largest and most luxurious open air museum tow. You depart on foot from Pile square to the newly renovated Cable Car station, which will take you to the best panoramic view from the Srd hill. The bird’s eye view on the greatness of the old Dubrovnik bathed in the sun will be a sight you will never forget. A clear day will grant you views of up to 60 kilometers and ample photo opportunities. Once returned the guide will lead you by foot through the narrow streets of the Old Town for the walking tour introducing you to the history and  culture of this magnificent city. The spirit of Renaissance preserved in this famous city awaits you. Overnight stay at Dubrovnik area.

Breakfast at the hotel. Check out and transfer to Dubrovnik airport for your flight to next destination.